Windows built in Command Prompt is ugly and dated. It also lacks proper Git integration. Git for Windows comes with a configured Git Bash you can use instead. Combine that with Mintty and you now have a full featured themeable terminal rivaling the built in Mac OS Terminal. 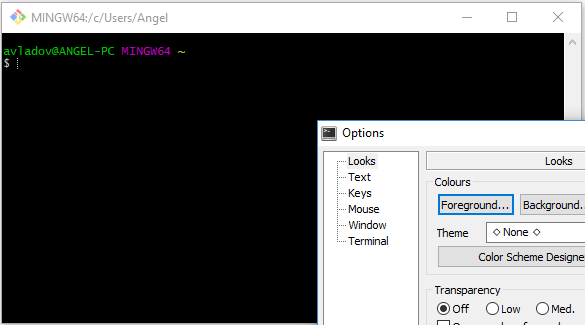 In the Git for Windows installer choose Use MinTTY when asked to configure the default emulator. This will allow you to apply a custom theme. In addition:

Open Git Bash, right click on the title bar and select Options…. You’ll see Theme select box. There’s no need to setup the theme manually color by color. Get one of the base16 color schemes from oumu/mintty-color-schemes.

You’ll see the new theme applied to the terminal. Looks much better, doesn’t it?

How about some transparency?

In addition the the custom theme I like turning on light transparency when the terminal window is inactive.

Removing MINGW64 from Title and Prompt

No one likes the MINGW32 or MINGW64 showing in the prompt. It just strains the eye with useless text. Let’s remove it. In Windows Explorer open the following folder:

NOTE: If git-prompt.sh is invalid Git Bash crashes and starts creating infinite processes. In this happens restart and then edit the file again. If the issue persist replace the file with the original copy.

One of the downsides of Mintty is that you need to open bat files by writing the full extension. Let’s make the extension optional. We want to able to open example.bat by just writing example.

What we need is to add a fallback that checks for bat files when there’s existing no command to execute. We can do that by adding command_not_found_handle to .barchrc.

Nodejs and gulp coloring in MINGW

There’s an issue with MINGW and nodejs console output coloring. It’s most noticeable if you are using gulp or grunt. Text will be plain white instead of using the chalk colors that were set.

Fix that by creating a new Windows environment variable FORCE_COLOR with value YES.

Not enough or you need tabs?

There are other options out there if you need tabs or opening more than one terminal type at once. They take more memory though, so the solution won’t be as lightweight as using Git Bash.

Using command prompt on Windows doesn’t need to be ugly and unpleasant. Try it yourself.

This site uses Akismet to reduce spam. Learn how your comment data is processed.